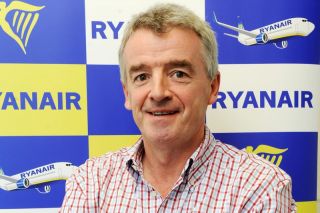 LONDON - Ryanair can wait out price rises sought by planemakers since the global grounding of the Boeing 737 MAX, the Irish airline's boss said. Europe`s larges low-cost airline is looking to place an order for the biggest derivative of the 737 MAX family - the 737 MAX 10 - according to industry sources.

Ryanair Chief Executive Michael O'Leary said his company can wait for prices to drop before placing any large orders. "I think we have to wait for the next turn in the cycle," he said at a Reuters Newsmaker event in London.

"At the moment there are no pricing opportunities on aircraft. The MAX has been grounded, Airbus are pricing up, Boeing are pricing up because they've nothing to sell."

Industry sources say Ryanair has begun commercial talks with Boeing over an order for a larger MAX variant that could be finalised once the current version returns to service.

The price of the potential 737 MAX 10 order is expected to include sharper discounts in lieu of cash compensation for the grounding of the older variants, the sources have said.

Ryanair has said it is interested in 100 Airbus A321neo aircraft for its recently acquired Laudamotion business and the 737 MAX 10 for its all-Boeing main fleet "at the right price". But O'Leary said the talks with Airbus were going slowly.

While Laudamotion provided a platform to acquire Airbus planes into the Ryanair Group, the MAX grounding has not caused him to reconsider his policy of running just one aircraft type per airline, he said.

On Tuesday O'Leary said Ryanair is in "continuous dialogue" with Boeing in the hope that 30-40 737 MAX jets could be operational by summer 2020, assuming the plane is cleared to return to service by the end of this year or soon after.

Ryanair recently lowered the target for next year to 30 from 58 because of the delays caused by the grounding of the MAX fleet after two fatal crashes that killed 346 people. Before the MAX can return to service, U.S. and European aviation authorities need to approve software and training changes proposed by Boeing.

A likely proliferation of European environmental taxes will eventually force more carriers out of business, O'Leary also predicted on Tuesday, while condemning proposals that would force low-cost carriers to bear the brunt of increased levies.

"It's going to hasten the consolidation of the industry," O'Leary said. Governments including France and the Netherlands are introducing new airline taxes or considering doing so, with exemptions for connecting flights in a move that would help traditional network carriers such as Air France-KLM.

"You can't exempt connecting transfer traffic from environmental taxes," O'Leary said, adding that such flights represent the most environmentally damaging traffic because they involve two flights to reach their destination.

"As we cram you all in together, you can take comfort from the fact that you're having the least impact on the environment of any passenger airline group in Europe," O'Leary said.
© Reuters, aero.uk | Image: Ryanair | 14/10/2019 08:21

Published on Oct 14, 2019 - 10:36
AirTommy
No pricing opportunities? IAG got an insane deal from Boeing on the 200 MAX - Ryanair clearly has no visibility beyond 2020.
All comments