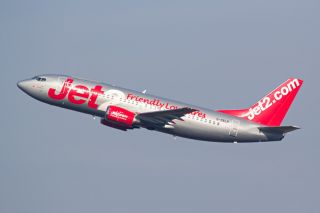 LONDON - Dart Group, the owner of British airline and tour operator Jet2, raised its profit guidance as it boosted passenger numbers following the collapse of former rival Thomas Cook last month. The integration of an airline and a tour operator business is "well proved", according to Dart.

Dart, which runs package holiday company Jet2holidays, said it had received good levels of late season bookings in its leisure travel business, with strong demand for its flight-only and package holiday products.

Thomas Cook, the world’s oldest travel company whose shops have been a feature of British town centres for generations, collapsed last month, stranding tens of thousands of passengers as its UK business went into liquidation.

Dart, which runs Britain’s third-biggest airline in terms of passenger numbers behind Easyjet and British Airways, said it will continue to assess the impact that Thomas Cook’s collapse will have on its business in the coming months.

"Dart’s integrated business model has been well proved and we see the company being a LT (leisure travel) industry winner," Stifel analysts said. "The next couple of years could prove to be a landmark period for the group."

European tourism group TUI said last month it was assessing the impact of the collapse but stuck to its full-year forecast. TUI said it would boost its travel portfolio for German tourists and attract 500,000 new German customers next year, as it is offering partnerships to travel agencies affiliated to insolvent Thomas Cook.

Dart, like its peers, has flagged headwinds due to rising costs related to fuel, carbon and other operating charges.

"Given the cost pressures the travel industry is facing in general, which will intensify given the weakness in sterling, plus the deepening Brexit uncertainty and the impact this may have on consumer confidence, we remain very cautious in our outlook,” the company said.

The company expects to exceed the current market forecast for full-year profit before foreign exchange revaluations and tax. Analysts expect it to report an annual pretax profit of 149.5 million pounds ($186.07 million) for the year ending March 31, according to Refinitiv Eikon data.