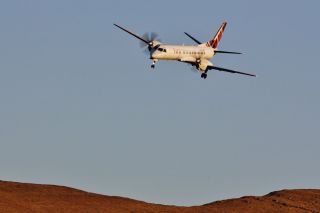 LONDON - Flybe, Europe’s largest regional airline, and Loganair of Scotland announced a new co-operation agreement that offers passengers the choice of a broad range of additional travel connections throughout the UK and Europe.

Customers travelling between destinations such as Sumburgh and Southampton, Inverness and Exeter, Stornoway and Birmingham, and Norwich and the Isle of Man can benefit from a renewed co-operation between the UK’s two leading regional airlines.

"Loganair and Flybe routes to and from Aberdeen, Edinburgh, Glasgow, Inverness and Manchester – the five main airports where the airlines’ networks meet – are included", the airline said.

That means that customers making a single booking for a connecting journey between Flybe and Loganair flights can check-in bags right through to their final destination with the assurance that they will be re-booked to their destination free of charge if weather conditions or other delays lead to missed connections.

The new codeshare agreement also offers "a significant saving" for customers as they no longer have to pay the multiple Air Passenger Duty charges they faced previously when buying separate tickets from Loganair and Flybe to build their own connecting itinerary.
© aero.uk | 22/10/2019 08:27