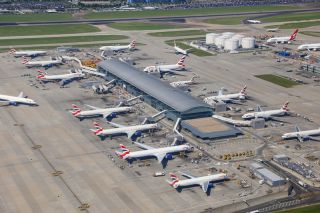 LONDON - The airline industry needs to take strong action to reduce carbon emissions and withstand the "flight shame" movement by environmentalists seeking to reduce commercial flying, an executive for London's Heathrow airport said on Friday. The airports expects "global hubs" to be less effected by the movement.

The airport, which is Europe's biggest and is set for record passenger numbers this year, has become a symbol of the polluting aviation industry in the eyes of campaigners.

The airport is set to add a third runway by 2026 under expansion plans that were approved by lawmakers last year but are being challenged by environmentalists, local groups and the mayor of London in court. The latest hearings will end on Friday and a ruling is expected before the end of the year.

"We haven't seen a significant shift in terms of traffic patterns, but that can change in the future if collectively we don't take very determined action against carbon," Chief Financial Officer Javier Echave told Reuters.

He added that Heathrow's status as a global hub made it relatively well-placed to withstand reduced demand for flying.

Initial evidence showed smaller airports were seeing more effects from the anti-flying movement, especially in Sweden and other Nordic countries where the "flygskam" - or "flight shame" - movement was born, Echave said.

"Point-to-point airports tend to be more exposed to local dynamics, but the fact we're a hub airport, that means ... stability," he said.

Climate change protesters targeted Heathrow last month, attempting to fly drones within a restricted area around the airport to ground flights. The action had no impact on flights.

Heathrow has committed to a British government target for net zero emissions by 2050 for aviation, and has pledged to make the airport's infrastructure carbon neutral by 2020.

It has said it will make its airspace more efficient, using better technology to reduce the time that aircraft spend circling over the airport waiting for a landing slot, while it also lobbies the government to use money raised from air passenger duty to accelerate a transition to alternative fuels.

Echave said he was delighted that British Airways owner IAG had committed to carbon offsetting of the airline's domestic flights. Heathrow said it would outline more details about its plans to reduce or offset aircraft emissions in the coming months.

But critics like campaign group Extinction Rebellion, which says the world faces an emergency over global warming unless there are urgent and dramatic cuts to carbon emissions, say flying and airport expansion is incompatible with humanity's survival.

Commercial flying accounts for around 2.5% of global carbon emissions. Aviation industry officials say that while plans for flight growth must take emissions into account, the industry can meet climate change targets without shunning flying altogether.

"Climate change, let's be clear, we see that as the biggest generational threat that we all face," Echave said, while adding that he saw the problem not as flying but carbon emissions.