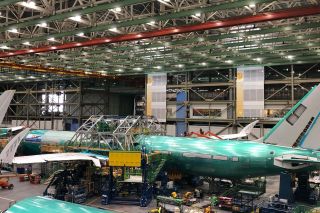 PARIS - Planemakers worldwide face tougher scrutiny and changes in the way aircraft are certified in the aftermath of two fatal crashes of Boeing 737 MAX jets, leading regulators have told Reuters. The head of FAA expects a different environment for airplane design and regulatory review in the 2020s.

Tuesday marked one year since the deadly crash of a Lion Air jet, which Indonesian investigators linked in part to violent seesaw movements triggered by flawed anti-stall software.

The MCAS software, activated by a single faulty sensor and omitted from training manuals, has led to calls for tighter regulation as well as improvements in the training of pilots.

"The certification process will change; I think so," the head of the U.S. Federal Aviation Administration, Steve Dickson, told Reuters late on Monday at an airlines meeting in Brazil.

Boeing 737 MAX aircraft have been grounded around the world since March following a second fatal crash, this time involving a plane operated by Ethiopian Airlines.

Speaking to airlines earlier, Dickson also emphasized a need to raise standards for airplane pilot training globally. A recent report by international regulators, commissioned by the FAA, faulted processes at both the U.S regulator and Boeing.

But the impact of the crisis is likely to be felt worldwide, including at Boeing's rival Airbus and new entrants from Russia to China and Japan, as regulators step up efforts to ensure that risks are correctly identified right from the drawing board.

"We are going to make it harder," Patrick Ky, executive director of the European Union Aviation Safety Agency (EASA), told Reuters when asked about the future of certification in general, without naming countries or companies.

"In the future we may ask to have a larger set of data which will be used in the certification case than today," he added.

In part, that will involve using new technology to run simulations to spot flaws that may be missed in flight testing.

But regulators are also expected to take a close look at one of the key tenets of aviation safety, an obscure piece of regulation known as the "Changed Product Rule". Under this rule, manufacturers revamping an old design like the 737 only need to comply with latest regulations on systems undergoing major changes, which means risks must be understood.

For the rest of the aircraft, the original standards still apply, which in the case of the 737 date back to the 1960s. That is no problem when risks are small, officials say. But this month's international regulatory panel report said the rule did not adequately address the cumulative effects of individual changes on small systems.

"In general, the analysis was limited to areas that changed, re-using prior certification basis to complete the process," former Boeing engineer Peter Lemme wrote in a blog on Tuesday, citing a series of flawed assumptions used in the design.

The Joint Authorities Technical Review (JATR) also found Boeing had missed the big picture by focusing on whether individual systems like MCAS complied with regulations, without also taking a top-down view of the impact on the whole aircraft.

Boeing's chief executive was due to tell a Senate committee on Tuesday that it made mistakes over the MAX.

It has also said it is committed to working with regulators in reviewing the recommendations in the JATR report. One regulator told Reuters a review of the Changed Product Rule would be among the main changes stemming from the crisis.

That could have implications for airplane design after years in which global planemakers have focused on upgrading existing models before tackling costlier clean-sheet designs.

"There is nothing wrong with derivatives; it is just (a question of) how we certify with full confidence the way in which modifications are made from an existing type," Ky said.

Others say regulators are likely to check each other's homework more actively than in the past, while preserving a convention that allows the home regulator for each planemaker to take the lead, such as the FAA for Boeing or EASA for Airbus.

Safety officials don't expect this to lead to meddling by foreign regulators on routine design changes. But post-MAX, agencies are likely to be vigilant when the risks warrant it.

The JATR also broke with tradition by suggesting companies should design systems with an over-arching vision of safety in mind, not just ensure their work complied with regulations.

Some saw this as a rare rebuff to the decades-old framework of aviation safety, which depends on thousands of rules and regulations with its own United Nations agency to oversee them.

One engineer outside the United States voiced concern about the move, saying record-low accident rates demonstrated there was no conflict between compliance and safety. But the JATR said the process as it stood had not managed to identify every risk.
© Reuters, aero.uk | Image: GE | 30/10/2019 07:55