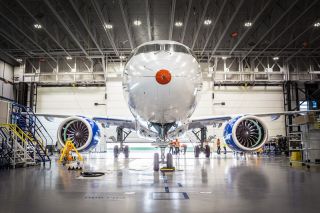 MONTREAL - Canada's Bombardier said on Thursday it had agreed to sell its aerostructures business to Spirit AeroSystems for more than $1 billion in cash and debt. As part of the deal, Bombardier will sell two aerostructure facilities - the Belfast plant and another in Morocco - along with a smaller repair plant in Dallas.

The move is part of the Canadian company's plan to shed its commercial aviation business to focus on its higher-margin business jets and rail divisions.

"This transaction represents another strategic milestone in the reshaping of our portfolio to focus on our strong business aircraft and rail franchises," Bombardier Chief Executive Officer Alain Bellemare said in a statement. [nGNEc8c4ZJ

Analysts have said a deal would be strategic for Spirit, an aerospace components maker, as it diversifies its customer base away from Boeing Co.

Spirit is Boeing's largest supplier, but the company has plans to grow its business with Europe's Airbus. Reuters previously reported that Wichita-based Spirit had emerged as the front-runner to acquire the facilities.

Spirit said the deal will provide the aero parts maker with a backlog of work including long-term contracts on Airbus A220 and A320neo planes, along with business and regional jets of Bombardier. The statement by the two companies confirmed information given to Reuters earlier on Thursday.

The Belfast plant, which produces wings for Airbus's A220 jet, is considered politically sensitive as it is the largest high-tech manufacturer in Northern Ireland with a workforce of around 3,500.

The A220 program is growing with Airbus recording a backlog of 435 of the 110 to 130 seat jets as of Sept. 30. The deal, which is expected to close in the first half of 2020, would include liabilities, including pension obligations.

Separately, Bombardier reported a lower quarterly profit as it spent more to step up production of its Global 7500 business jets, while Spirit posted a 22% drop in quarterly profit, mainly due to charge related to the 787 Dreamliner aircraft.
© Reuters, aero.uk | Image: Bombardier | 31/10/2019 14:37