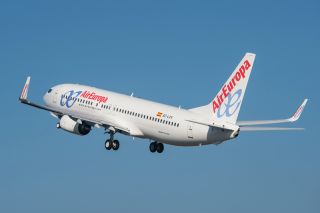 MADRID - IAG the parent of British Airways and Spain’s Iberia, announced a 1 billion euro ($1.12 billion) takeover of Spain’s Air Europa to boost its presence on routes to Latin America and the Caribbean. The deal follows a setback in Latin America for IAG - and raises competition concerns at rivals.

The deal materialized after Chile’s Supreme Court ruled against a plan that would have allowed it to bolster cooperation with partners in the oneworld airlines alliance.

Chile’s LATAM Airlines in September then announced it planned to leave the alliance, opting instead for a tie-up with SkyTeam member Delta Air Lines (DAL.N).

IAG shares initially rose more than 2% following the Air Europa takeover announcement but some analysts said IAG may have to shed routes in order to win regulatory approval.

IAG shares were up 1.2% at 1315 GMT. Ryanair CEO Michael O’Leary said his company will ask the UK’s market watchdog to force IAG to make divestments as part of its Air Europa takeover, a deal he said would be bad for competition.

"Potential remedies, perhaps in the form of slot release or behavioral restrictions, may be required and these could impact the potential synergies,” an analyst at Liberum wrote in a note. IAG also owns carriers Iberia Express, Level, Ireland’s Aer Lingus and Vueling.

"We are not convinced that having just another brand platform is the optimal move, and could see it potentially combining with Level, Vueling or potentially Iberia Express after some time,” analysts at Bernstein said. Air Europa serves 69 destinations, including long-haul routes to the Americas and the Caribbean. It had a fleet of 66 aircraft at the end of 2018.

Air Europa’s Spanish parent company Globalia earlier this year received authorization from the Brazilian government to explore the possibility of flying domestic routes within Latin America’s largest economy. It is unclear if that authorization will remain with Globalia or be transferred to IAG.

Air Europa will initially keep its brand and as it gets integrated into the existing hub at Madrid it will be a standalone operation run by Iberia boss Luis Gallego, IAG said.

It will also withdraw Air Europa from the SkyTeam alliance once the deal is completed. Air Europa has a joint venture with Air France-KLM.

"This is of strategic importance for the Madrid hub, which in recent years has lagged behind other European hubs,” said Gallego, adding that Madrid had the potential to serve as a gateway between Asia and Latin America.

IAG said it expected the Air Europa deal, which will be funded through external debt, to close in the second half of next year and for it to add to its earnings in the first full year after the closure.
© Reuters, aero.uk | Image: Air Europa | 05/11/2019 08:04