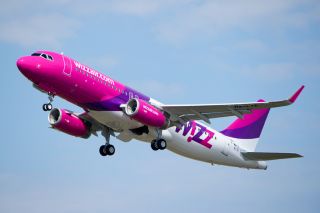 BUDAPEST - Wizz Air lifted the bottom end of its annual profit forecast and further raised its capacity growth outlook, as the budget airline flew more passengers and curbed costs in the first-half, while struggling rivals cut expansion plans. The Airline does not suffer delays caused by the 737 MAX Grounding.

Wizz, which competes with Lufthansa's Eurowings brand at European airports such as Vienna, is performing well in an industry plagued by weaker demand, rising fuel costs, competition, strikes, bankruptcies and the grounding of Boeing's 737 MAX fleet.

British Airways parent IAG has warned that its full-year profit will be hit by a pilots' strike at the UK carrier, while Lufthansa is ready to go into arbitration to resolve a long-running staff dispute. Ryanair also expects further delays to its 737 MAX deliveries.

Váradi, however, said Wizz - powered by Airbus planes - had not really benefited from the groundings. "Airlines were smart and created ways of replacing capacity in 85% of the cases," he said.

Wizz's central and eastern European focus has sheltered it from some of the fierce price competition that has dominated Western Europe's aviation market in recent years.

"Despite rapidly rising fuel costs, Brexit uncertainty and chronic overcapacity in the sector, Wizz Air was still able to report record financial results for the first half of the year," eToro analyst Adam Vettese, said. "Wizz ... is leaving the rest of its low-cost rivals behind," he said.

Shares in the Budapest-based company were, however, 2% down in a weaker wider market, with analysts saying most of the good news was already in the price after the stock hit a record high earlier this month.

Váradi said Wizz's British subsidiary, created 18 months ago with a fleet of 10 aircraft to ensure full market access to Britain after Brexit, was performing well.

He added that Wizz, which operates 70 routes flying out of Britain, had seen a lot of inbound tourism to the country despite Brexit jitters, with Britons travelling to Hungary, Poland, Tel Aviv and Cyprus.
© Reuters | Image: Wizz Air | 13/11/2019 13:45