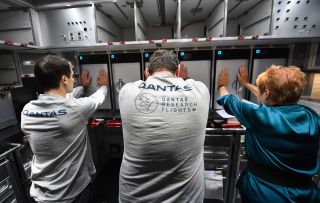 LONDON - Qantas trials its London - Sydney nonstop service with a test flight that left Heathrow airport with 50 passengers Thursday., Serving airlines that will operate flights lasting 14 hours or longer is a "key consideration” for Boeing global growth strategy over the next 20 years, an executive said.

Those flights, sometimes called ultra-long haul, have grabbed headlines in recent weeks as Qantas Airlines tested a 19-hour flight between New York and Sydney using a Boeing 787-9 and prepares to test an even longer flight between Sydney and London with the same plane.

Commercial aviation overall is expected to grow 4.6% per year on average between 2019 and 2038, according to a Boeing market study released in September, representing a slight slowing from the previous pace of about 5%, according to figures compiled by the World Bank.

Growth in the ultra-long haul sector highlights changing habits among passengers, who are willing to travel longer. It is also a tribute to the increasing fuel efficiency of aircraft that allow for such routes to be flown profitably.

But Hulst said this market has developed without Boeing expecting it to, pointing specifically to the carrier’s use of the 787-9 plane to fly ever longer trips. This plane is now the "key player” for ultra long-haul flights involving midsized wide-body planes.

"When we designed the airplane, I think the sweet spot for where we saw the airplane operating was between nine and 14 hours,” Hulst said.

Boeing competitor Airbus is also targeting the segment above 14 hours with the A350-900ULR, which Singapore Airlines currently uses to fly the roughly 18 hours between Singapore and the New York metro area. That flight is the longest currently in commercial operation.

Airbus also plans to soon launch an Ultra Long Range version of the A350-1000, while Boeing pitched a 777-8 and a "stopgap" solution until its EIS to Qantas. Qantas currently operates a regularly scheduled flight between Perth, Australia, and London which is the longest commercial flight using a Boeing 787-9. But that title could change if the carrier decides to operate the Sydney-New York route commercially.