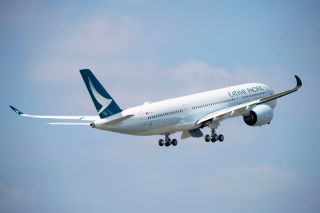 In addition to delaying the arrival of three A321neos at regional arm Cathay Dragon and one A320neo at budget carrier HK Express, it said it would retire one Boeing Co 777-300ER and one Cathay Dragon A320 earlier than expected.

The airline said on Wednesday the short-term outlook remained "challenging and uncertain" as it lowered its profit guidance for the second time in less than a month.

Cathay has said it plans to cut capacity by 6-7% in the short term by reducing flight frequencies.

"We believe Cathay is positioning this as a near-term problem only as highlighted by their strategy to cut capacity but not ground/park planes," Jefferies analyst Andrew Lee said in a note to clients after an analyst briefing on Thursday.

A Cathay spokeswoman said management explained the short-term capacity cut measures at the briefing but did not raise the prospect of taking more drastic action.

Cathay said last week it planned to allocate half its order for 32 A321neo aircraft to HK Express as it looks to grow in the budget market, but made no mention of any changes to the delivery schedule.

An Airbus spokesman said delivery schedules change from time to time by mutual agreement with customers, declining to provide further details of the timing.

Cathay said in its Thursday statement that unrest in Hong Kong was expected to lead to a small post-acquisition loss for HK Express, which it bought this year from Chinese conglomerate HNA Group for HK$4.93 billion ($629.7 million).
© Reuters, aero.uk | 16/11/2019 09:23