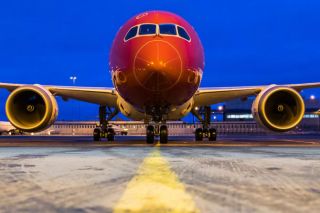 OSLO - Budget airline Norwegian Air is ending flights from Copenhagen and Stockholm to the United States and Thailand due to weak demand and technical problems affecting the engines on its Boeing 787 Dreamliners, it said last week. At the same time Norwegian secured Heathrow slots.

Flights between Oslo and the United States would continue, while routes between Norway and Thailand were under review, it said, the latest initiative to cut costs and restore profits after rapid expansion left the carrier weighed down by debt.

Norwegian’s shares were down 2.2% at 1310 GMT, although shares in Nordic rival SAS (SAS.ST), which has direct flights from Stockholm and Copenhagen to the United States, rose 2.7%.

Norwegian has shaken up the transatlantic travel market with low fares, challenging major transatlantic carriers such as British Airways. But its profitability has suffered.

To stem losses, Norwegian has cut unprofitable routes, saying last month it would reduce capacity by 10% next year, the first plan to shrink in its near two-decade history. Shareholders approved on Wednesday a share and bond issue, announced last month, to raise $273 million in cash.

Norwegian plans to use the extra cash to help cover costs of resulting from the grounding of its short-haul fleet of Boeing MAX aircraft and issues with engines on its long-haul Boeing 787 Dreamliners.

Britain’s Rolls-Royce (RR.L) said in September it would take longer than expected to fix problems with the Trent 1000 engine that were caused by poor durability of turbine blade components.

"We have for a time been struggling with the Rolls-Royce engines on our long-distance aircraft, which means we need to keep more planes on the ground. This affects our route schedule,” Norwegian’s Wood said.

According to a recent publication by the UK slot coordinator, Norwegian has been granted six weekly slots at Heathrow airport for the 2020 summer season. The airline has not announced yet, which routes it expects to serve out of LHR.
© Reuters, aero.uk | Image: Norwegian | 02/12/2019 08:26