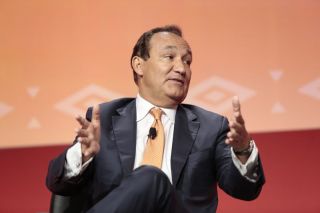 CHICAGO - United Airlines Holdings insider Scott Kirby will succeed Oscar Munoz as chief executive officer next year as part of a transition the airline hopes will secure a growth path after some tumultuous years.

Kirby was recruited as the airline's president from rival American Airlines Group Inc in 2016 and has been groomed for the top job. He will take the helm in May, when Munoz will assume a one-year position as executive chairman.

The leadership change follows share price and earnings improvements for United thanks to an aggressive growth strategy implemented by Kirby last year, following a public outcry over a viral video showing a 69-year-old passenger being dragged off a sold-out United flight in April 2017.

To improve United's image, Munoz implemented "compassion" training to employees and focused on building morale after years of strained labor relations, while Kirby overhauled the airline's hubs and built up its flight network.

"With United in a stronger position than ever, now is the right time to begin the process of passing the baton to a new leader," Munoz said in a statement.

Kirby, 52, is known as one of the industry's most talented executives, though he does not have the reputation that Munoz built with front-line employees and the market has sometimes viewed his strategies as aggressive.

"Thank you for taking a chance on me," Kirby said in a video message alongside Munoz. "As we look forward to the next few years, we'll continue the growth."

Chicago-based United's shares, which have risen about 54% since Munoz took over as CEO, were down 0.5% at $87.74 at midday on Thursday.

Munoz, a longtime rail executive, suffered a heart attack shortly after taking the helm at United and received a transplant in January 2016. While recovering, he continued to take part in major decisions across the company and meetings with employees and shareholders.

Munoz replaced Jeff Smisek, who resigned because of probes into United's relationship with the Port Authority of New York. As part of the transition, United's current Chairman, Jane Garvey, will retire from the Board in May 2020.

Kirby's ascension to the top job will end speculation about his possible return to American, which has been struggling with poor operation and earnings underperformance versus its peers. American's shares have fallen about 23% since Kirby left the company.

One of the sector's biggest challenges next year will be returning Boeing Co's 737 MAX jets to their networks after a prolonged grounding triggered by two fatal crashes on flights operated by Lion Air and Ethiopian Airlines. United had 14 MAX jets in its fleet at the time of the March grounding and dozens more on order.
© Reuters, aero.uk | 06/12/2019 08:48