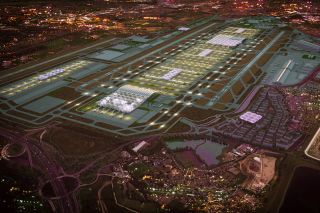 LONDON - An expansion plan for Britain's Heathrow Airport will be delayed by more than a year and a third runway now will probably be completed between early 2028 and late 2029, the airport said. A new railway link connecting the city the and the British Airways hub is also set to open behind schedule.

The delay came after Britain's aviation regulator, the Civil Aviation Authority, said the airport could not increase its spending on early construction costs to ensure that the runway was built by the end of 2026, as it wanted.

The CAA said it was in the best interests of consumers for Heathrow to spend more than 1.6 billion pounds ($2.1 billion) on early construction, rejecting the airport's 2.4 billion-pound plan.

British Prime Minister Boris Johnson has opposed Heathrow's expansion, but parliament has approved the 14 billion-pound plans, which include building the first full-length new runway in the London area for 70 years. The expansion plan is also opposed by climate change protesters and some local residents. It is being challenged in the courts.

The CAA said that limiting costs to 1.6 billion pounds was in the best interests of passengers, who could end up footing the bill through higher airport charges if Heathrow does not win planning permission.

"While we recognise the potential benefit to consumers of the runway opening being as early as possible, we are also mindful of the risks associated with sunk costs," the CAA said in a report published on Thursday.

It said that an independent surveyor had called Heathrow's plan to open a new runway by 2026 a schedule which is "in all likelihood too aggressive".

Heathrow called the CAA's report "an important milestone" but said it would result in the delay. "The CAA has delayed the project timetable by at least 12 months. We now expect to complete the third runway between early 2028 and late 2029," a spokesman for the airport said.

Heathrow Airport is owned by Ferrovial, Qatar Investment Authority and China Investment Corp, among others.

In seperate news the railway line running from Reading to the west of London, on to Heathrow Airport and central London will open behind schedule in mid-2022.
© Reuters, aero.uk | Image: Heathrow Airport | 15/01/2020 09:38