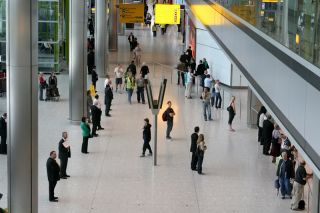 LONDON - Britain will start enhanced monitoring of all passengers who arrive on direct flights from the Chinese city of Wuhan to tackle the threat of coronavirus.

Passengers on the three direct weekly flights to London's Heathrow Airport from Wuhan, the epicentre of the infection's outbreak, will be checked for symptoms and given advice about what to do if they become ill, The Department of Health and Social Care and Public Health England said in a statement on Wednesday.

The flu-like coronavirus has since spread to other Chinese cities including Beijing and Shanghai as well as the United States, Thailand, South Korea, Japan and Taiwan.

It has killed nine people in China where officials say there are 470 confirmed cases. Britain said it would expand the enhanced monitoring to flights from other Chinese cities if necessary.

"This is a new and rapidly evolving situation... Based on the available evidence, the current risk to the UK is considered low," Nick Phin, deputy director of the National Infection Service at Public Health England, said.

The risk to the British population was raised to "low" from "very low" on Wednesday, the health authorities said. Heathrow is Europe's busiest airport with over 200,000 passengers passing through each day and many connections to China, including 17 flights from mainland China and Hong Kong arriving on Wednesday.

The government said it would use an isolated area at Heathrow Terminal 4 to receive aircraft from Wuhan.

The virus's progress has stoked fears of a pandemic similar to the 2003 outbreak of Severe Acute Respiratory Syndrome (SARS) that started in China and killed nearly 800 people and dented global demand for travel. Heathrow said it was working with the government to support the implementation of the monitoring measures.
© Reuters, aero.uk | 22/01/2020 19:41