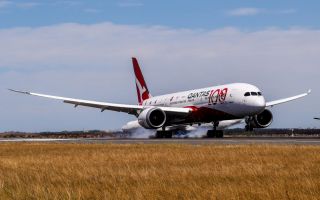 SYDNEY - Qantas Airways has urged its pilots to reach agreement on a pay deal for the world's longest commercial flights or face being replaced for those routes. An amended contract is paramount for ultra-longhaul flights Qantas plans to launch in early 2023 between Australia und Europe.

The airline selected the Airbus A350-1000 as the preferred plane for the new routes to cities including London and New York in the first half of 2023, but it said that an order for up to 12 jets was contingent on reaching a deal with pilots by March.

In an internal memo seen by Reuters, Qantas International head Tino La Spina said the end of March deadline for a pilot vote on the deal was firm.

"Airbus extended the delivery slots one last time once they knew they were the preferred supplier, but they are not willing to continue their exposure beyond that point," he said.

Qantas and the Australian and International Pilots Association (AIPA), which represents the pilots, have spent months in talks over a new pay deal.

If a deal is not reached soon, the company will put a pay deal directly to the pilots for a vote even if it does not have the union's backing. A failure of that vote would result in Qantas forming a new lower-cost pilot group, La Spina said.

"Our strong preference is to reach an agreement with our pilots," he said in a statement after the memo was sent. The pay on offer for Qantas A330 pilots who would also be flying the A350 is about 5% more than for its Boeing 787 fleet, the memo said.

One of the biggest stumbling blocks between the airline and union has been pay rates for future second officers, the most junior pilots.

Mark Sedgwick, president of the AIPA union representing the pilots, said that the union had proven willing to negotiate with the company, citing a recent agreement for short-haul pilots.

"Unfortunately, the approach that Qantas is now showing publicly has been a characteristic of the long-haul discussions and shows how this business would apparently prefer ultimatums to building consensus at this critical juncture," he said in a statement.
© Reuters, aero.uk | Image: Qantas | 14/02/2020 07:54