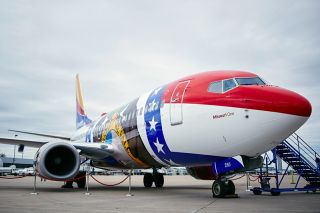 DALLAS - The U.S. Federal Aviation Administration says it should have done a better job of ensuring Southwest Airlines had certified completion of maintenance on 88 used Boeing 737 jets, as noted in a report by the U.S. Transportation Department's Inspector General released on Tuesday.

Budget-friendly Southwest bought the planes in question between 2013 and 2017 from 16 foreign carriers.

The final report, first seen by Reuters, said Southwest operated more than 150,000 flights carrying 17.2 million passengers on the jets without confirmation that required maintenance had been completed.

The report said the FAA has not "effectively overseen Southwest Airlines' systems for managing risks" and made 11 recommendations to improve oversight, including retraining inspectors and developing better control over maintenance records and inspector guidance on evaluating air carrier safety culture.

While the U.S. commercial airline industry is considered safe, with only one fatality in recent years, the FAA is under heightened scrutiny by lawmakers over its relationship with the industry after two crashes overseas on the newer Boeing Co 737 MAX killed 346 people and led to that aircraft's global grounding.

"Given the significant unresolved safety concerns that FAA has identified at Southwest Airlines, it is clear that the agency is not yet effectively navigating the balance between industry collaboration and managing safety risks at the carrier," the report said.

The FAA said in a response included with the report it concurred with all 11 recommendations and the inspector general's conclusion that its office overseeing Southwest did not perform in accordance with existing guidance by allowing the 88 planes to enter service and that it "lacked a comprehensive conformity inspection for used aircraft."

Southwest told Reuters on Tuesday that eight of the 88 jets remain out of service until needed repairs are completed and that it disagreed with the report's findings.

The report chided the FAA, saying the agency "accepted the air carrier’s justification that the issues identified were low safety risks."

The FAA noted it changed the leadership of its office that oversees Southwest and "continues to address deficiencies in the work functions and culture." The agency has agreed to ensure Southwest "complies with regulatory requirements that the 88 previously owned aircraft conform to U.S. aviation standards."

Last month, the Wall Street Journal published an article on a draft of the inspector general report.

The report also said the FAA violated its own guidance in addressing noncompliance by Southwest on baggage weight and balance data. The FAA agreed to ensure Southwest complies with requirements.

Southwest has said it is working with the FAA to demonstrate the effectiveness of its controls and seek a resolution on the proposed penalty. Southwest shares closed up 0.9% on Tuesday, off intraday highs.
© Reuters, aero.uk | Image: South African Airways | 14/02/2020 07:59