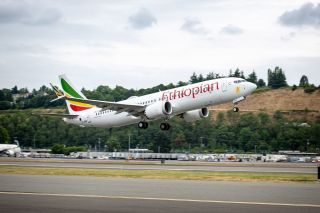 ADDIS ABABA - Ethiopia plans to release an interim report into a deadly Boeing 737 MAX crash, which killed 157 passengers and crew, ahead of the first anniversary of the accident next month, according to an official speaking on Saturday. A final draft of the report is "far from completion".

"We are not ready to release the final report and so we are releasing an interim one which will come out before the anniversary of the accident. We are finalising it," Amdye Ayalew, the country's chief crash investigator, told Reuters. He declined to give a precise date for the release of the final report.

Boeing`s popular 737 MAX has been grounded globally since the March 10 crash, which killed everyone on board, and came just five months after a Lion Air crash in Indonesia which killed 189 in a plane of the same model.

Under rules overseen by the United Nations' Montreal-based aviation agency, ICAO, Ethiopia should publish a final report by March 10, the crash anniversary. ICAO is not participating in the investigations into the incident.

Ethiopian Transport Ministry spokesman Musie Yehyies declined to explain why the final report was not being released and said on Saturday the investigations committee is expected to meet in the coming weeks to work on it.

A senior official at the ministry of transport, who spoke to Reuters on a condition of anonymity, said the final report was far from completion.

In April last year the Ethiopian Civil Aviation Authority released a preliminary report which revealed that faulty sensor readings and multiple automatic commands to push down the nose of the Boeing aircraft contributed to the fatal crash and left the crew struggling to regain control.

Experts said the preliminary document left unanswered questions, which are expected to be addressed in the interim report, on why the plane did not respond to pilot and automatic commands including two final nose up instructions from the pilots about 30 seconds before the crash.

Ethiopian Airlines and a Boeing representative in Ethiopia did not respond to requests for comment
© Reuters, aero.uk | Image: Boeing | 24/02/2020 07:51