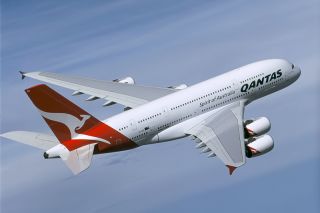 SYDNEY - Qantas suspends eight A380 from operation and applies changes to its Sydney - London service in the wake of corona.

Qantas slashes 23 percent of its international capacity through September. Rather than exit routes altogether, Qantas will use smaller aircraft and reduce the frequency of flights to maintain overall connectivity.

"This approach results in eight of the airline’s largest aircraft, the Airbus A380, grounded until mid-September," the airline said. "A further two A380s are undergoing scheduled heavy maintenance and cabin upgrades, leaving two of its A380s flying."

In response to "strong customer demand" for the direct Perth-London service, the existing Sydney-Singapore-London return service (QF1 and QF2) will be temporarily re-routed to become a Sydney-Perth-London service from 20 April.
© aero.uk | 10/03/2020 09:16