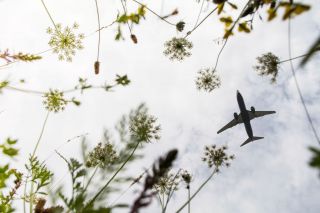 BRUSSELS - A majority of European citizens would support a ban on short-distance flights to fight climate change, according to a survey the European Investment Bank (EIB) said on Tuesday. The European airline industry faces increased public scrutiny on its efforts to lower its carbon footprint.

Of 28,088 respondents to the survey, 62% favoured a ban and an even greater majority of 72% said they would support a carbon tax on flights. The poll, conducted in September-October 2019, covered the then-28 European Union member states, including Britain.

It simply asked about support for a ban on short-distance flights and did not specify the length.

Emissions from flights inside the European Economic Area are covered by the EU carbon market. These emissions increased every year over the five years to 2018, according to the latest available EU data.

Europe's aviation sector faces increased scrutiny from customers and regulators over its carbon footprint and it is also battling other headwinds, including a sharp drop in demand because of the coronavirus outbreak.

European Commission President Ursula von der Leyen has said all sectors must contribute to the EU's target to reduce the bloc's net emissions to zero by 2050.

Some airlines have started voluntarily offseting emissions using carbon credits, although it is not clear whether the EU would accept these as a contribution to its 2050 goal.

The EIB, which is the long-term lending institution of the European Union and is owned by the bloc's member states, has ambitious goals on sustainable finance.

The bank said last year it would stop funding unabated fossil fuel energy projects at the end of 2021. The EIB said its survey showed Europeans support action to tackle climate change, even when it impacts their daily lives, but measures that would cause direct cost increases tended to receive less support.
© Reuters, aero.uk | Image: Stansted Airport | 15/03/2020 10:27