Norwegian Air gets lifeline but it may not be enough 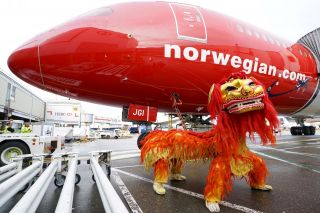 OSLO - Norwegian Air may struggle to meet the tough conditions set by the government as part of its financial aid, raising fresh doubts about its liquidity as coronavirus inflicts more financial pain on the airline sector. Norway said it will back airlines with credit guarantees worth up to 6 billion Norwegian crowns ($537 million) to weather the crisis.

Half of that would go to Norwegian Air provided that it could convince commercial lenders to supply a further 30 million crowns for an initial guarantee of 300 million.

To receive the full 3 billion, the company must first persuade creditors to postpone installment payments for loans and forego interest payments for three months.

DNB Markets analyst Ole Martin Westgaard said in a note the package was likely too small, calculating that it would only cover the total cost of grounding all Norwegian Air aircraft for one-and-a-half months.

"We are doubtful the company will be able to attract any interest from a commercial bank at interest rates that would make sense," Westgaard said. The stock was down 2.4% at 1227 GMT, after surging by over 20% in early trading as euphoria over the deal fizzled.

The carrier, which has grounded most of its aircraft and is temporarily laying off 90% of staff due to the virus pandemic, has lost more than 70% of its value this year.

The airline was suffering big losses before the virus hit and has been haemorrhaging cash in recent years after a rapid expansion into transatlantic routes. Westgaard added that he believed that the requirement to get creditors onboard would be almost impossible given the complex financing structure.

At a later stage, it would also need to raise some 2.7 billion crowns through a share issue, which is staggering given the company's market cap of just 1.8 billion, he added.

"We believe this will prove challenging – if not impossible – given current market conditions," Westgaard said.

Other airlines in the shattered global aviation sector are also counting the cost of government support as politicians around the world set out conditions for bailouts needed to absorb the shock of the pandemic.

Norwegian Air said late on Thursday it welcomed the government's offer to provide liquidity but said it was too early to comment on the specific conditions set.
© Reuters, aero.uk | Image: Norwegian Air | 21/03/2020 09:58