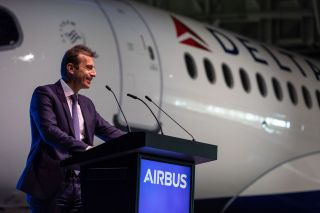 PARIS - Airbus announced plans on Wednesday to cut jetliner production across the board after the coronavirus epidemic triggered aviation's worst industrial crisis and drastically reduced deliveries to cash-starved airlines. First quarter deliveries already reflect the impact of the crisis on Airbus business.

In its largest-ever production adjustment, the European manufacturer said it was reducing output of its best-selling A320 narrow-body family by a third to 40 aircraft a month.

Announcing a parallel slowdown in new investments, Chief Executive Guillaume Faury said the cuts reflected the "new realities" of airlines, whose industry association warned this week of the loss of 25 million jobs dependent on air transport.

The move, which Airbus said represented an average output reduction of a third, came as deliveries halved in March to 36 aircraft.

Reuters reported last week that Boeing Co's European rival was considering sharp cuts in production of all models in the face of plunging demand, cash problems at airline customers and logistical difficulties in delivering aircraft.

Aviation has been hit worldwide by the pandemic. Airbus has experienced particular disruption since France and Spain - two of its core manufacturing nations alongside Britain and Germany - placed their populations in lockdown in mid-March, restricting the movement of workers.

Airbus said it had delivered 122 aircraft between January and March, down 25% from a year earlier. It also said it had produced a further 60 aircraft in the first quarter but was unable to deliver them because of the crisis, which has forced many airlines to defer deliveries and prevented others from sending teams to take delivery.

Since France imposed the restrictions on March 17, just six aircraft have been delivered and industry sources said Airbus had resorted to chartering private jets to bring in airline pilots to fetch new planes as commercial flights dwindle.

The planemaker has also been forced to pause production at several of its plants to introduce new working methods based on spacing out workers to respect new social-distancing rules. Since then, it has struggled to restore previous production levels due to gaps in the supply chain.

Even before changing the umbrella production contracts with its suppliers, Airbus had begun slowing the flow of parts into its factories by relying on a system of short-term commands, which is usually used to iron out kinks in the supply chain.

Faury warned the aviation industry would face a different world once the crisis abated and declined to say how long the reduced rates would last. Airbus will review them once a month.

He also reiterated plans to cut costs in the Airbus business including on the A350 programme, which is likely to fall back into loss at the new rates after breaking even last year.

He predicted a wave of consolidation among suppliers. "We see that the airlines are badly hit, and we are badly hit, and the next wave is going to be the supply chain," he said. Airbus won 60 orders in March and took 39 cancellations including a total of 15 A350s from Latam and Kuwait, data showed.
© Reuters, aero.uk | Image: Airbus | 08/04/2020 22:23