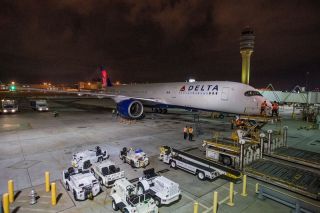 Airlines' daily cash burn rates, when they expect to run out of cash and their best estimates for projected wages and benefits between April 1 and Sept. 30 are among details Treasury has requested as it reviews applications for government aid, they said.

Treasury has also requested information on the value and historical cash flow of airlines' loyalty programs, as well as an overview of all unencumbered assets such as aircraft, engines and spare parts.

On Friday, U.S. airlines applied for a share of $25 billion in cash under a government relief package to help cover payroll and avoid layoffs until Sept. 30.

Airlines had hoped the money could arrive as soon as this week. As of late Tuesday, there was still no clarity on the timing or terms of the support, airline officials said.

Under the law, U.S. Treasury Secretary Steven Mnuchin can demand equity, warrants or other financial instruments to "provide appropriate compensation to the federal government," a condition that has caused pushback by some airlines, unions and Democratic lawmakers.

Every day airlines are burning through their cash reserves and looking at fresh ways to save costs while maintaining critical service even as passengers continue to dwindle as people remain homebound due to the new coronavirus.

The U.S. Transportation Security Administration screened just 97,130 travelers on Tuesday, down from over 2 million a year ago, according to data on its website.

JetBlue Airways, which is among the airlines seeking government aid, said on Wednesday it is consolidating flights in five U.S. metropolitan areas into just one or two airports until June 10. It also asked the U.S. Department of Transportation to exempt it from flying at other airports where current demand does not support its service.

"We face new challenges every day and can’t hesitate to take the steps necessary to reduce our costs amidst dramatically falling demand so we can emerge from this unprecedented time as a strong company for our customers and crew members,” JetBlue head of revenue and planning Scott Laurence said in a statement. JetBlue has already reduced flying across its network by 80% per day in April.
© Reuters, aero.uk | Image: Airbus | 09/04/2020 09:07