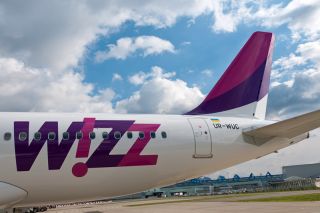 LONDON - Low-cost airline Wizz Air will reduce its workforce by 19%, cut salaries and return older leased aircraft to lower costs while it is not flying during the coronavirus pandemic.

Wizz Air, whose geographic focus is central and eastern Europe, said it could not give guidance for its current financial year but sounded a bullish note on prospects, saying it is sticking to a plan to grow capacity by 15% annually once markets normalise.

That confidence was in contrast to Lufthansa, which warned last week it was cutting capacity because it believed it would be years before air travel returns to pre-crisis levels.

Coronavirus has brought air travel to a standstill and any passenger flights that are still operating are mainly for repatriation purposes. Britain's Heathrow airport, traditionally the busiest in Europe, forecast passenger numbers would plunge by more than 90% in April.

Wizz, which said it was operating 3% of its capacity, said it had 1.5 billion euros ($1.6 billion) of cash at the end of March 2020, putting it in a strong financial position. Citi analysts have forecast that Ryanair and Wizz Air will be the only major European carriers to avoid refinancing.

For the 12 months to March 31 2020, the airline said it expected to report underlying net profit in line with its guidance range of between 350 million euros and 355 million.

It would however take an exceptional charge of between 70 million euros and 80 million related to hedging losses.

The airline, which is listed in London but was founded in Hungary, said it was making 1,000 people redundant, as well as cutting executive and senior officer pay by 22% and salaries of pilots, cabin crew and office staff by 14% on average.

It said it was also working with suppliers to cut contracted rates and that as existing lease contracts expire it would return 32 older leased aircraft by the end of 2023.
© Reuters, aero.uk | Image: Wizz Air | 14/04/2020 12:41