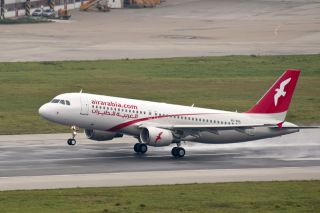 The United Arab Emirates' only listed airline made 71 million dirhams ($19.3 million) in the three months to March 31, compared to 128 million dirhams a year earlier, it said in a statement.

The airline recorded a strong start to the year but the coronavirus outbreak impacted overall performance in the first three months of the year, Chairman Sheikh Abdullah Bin Mohamed al-Thani said.

Headquartered at Sharjah airport in the UAE, Air Arabia also operates hubs in UAE emirate Ras Al Khaimah and in Egypt and Morocco.

Air Arabia laid off dozens of employees in the first quarter, blaming the impact of the virus, and warned the pending launch of its joint venture airline with Etihad Airways in Abu Dhabi was dependent on market conditions.
© Reuters, aero.uk | 15/05/2020 08:41