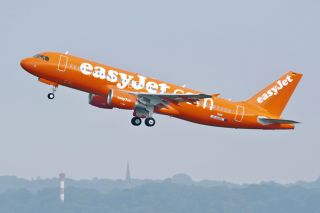 LONDON - Easyjet said founder Stelios Haji-Ioannou had failed in his attempt to oust key management including the CEO, according to the initial results of a shareholder vote brought over the airline's plan to buy new Airbus planes. Easyjet looks beyond the crisis and wants to maintain all orders.

Since the coronavirus pandemic brought air travel to a halt and forced Easyjet to ground its fleet, the airline has faced an additional headache as Haji-Ioannou stepped up his public campaign, calling on management to scrap the 4.5 billion pound ($5.6 billion) order for 107 new jets.

But the British airline's management looked set to secure backing from enough shareholders to win the votes, chairman John Barton told a virtual meeting, meaning management will stick with the order, which it argues is important for its future growth.

The full results of the vote are due to be released later on Friday but ahead of that Barton told the meeting: "Based on the proxy votes lodged with our registrar before the meeting, we expect all four resolutions put to the meeting to be defeated."

Haji-Ioannou, whose family is Easyjet's biggest investor with a 34% stake, says that management's plan for the airline to buy the new aircraft could bankrupt it during the current travel downturn.

He forced the meeting to give shareholders the chance to vote on whether to back four directors: the chief executive, chief financial officer, chairman and another director.

Management say that the company's financial position is strong enough to get through the crisis and the new planes are needed to replace ageing jets and will help it stay competitive when flying restarts.

"I can assure you we are doing everything possible to ensure that Easyjet can emerge from the crisis with its compelling commercial strengths of low-cost fares and great service intact," Barton told the shareholder meeting.

Having founded Easyjet in 1995, Haji-Ioannou quit the board in 2010 and this is the latest clash in a decade-long dispute with management.

His opposition to the Airbus deal is such that he offered a 5 million pound reward to anyone with information that could lead to the cancellation of the order earlier in May.
© Reuters, aero.uk | Image: Airbus | 22/05/2020 13:23