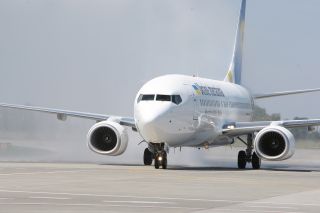 KIEV - Ukraine International Airlines, Ukrainian largest carrier, is cutting about 35% of its staff amid a sharp decline in its passenger traffic due to the coronavirus lockdown, the company said on Thursday.

Ukrainian authorities banned scheduled passenger air services in mid-March, among other restrictions imposed on businesses and individuals, in order to minimise the spread of the disease.

In the past two months, the airline has flown only several repatriation flights to bring Ukrainians home from other countries.

The privately owned airline hopes it will be allowed to start resuming normal operations after June 15. But according to the company's forecast, its passenger traffic will decrease by approximately 46% this year.

"We deeply regret to have stopped employing 900 highly qualified professional because of the substantial decline in the airline’s operations," the company's chief executive officer Yevhenii Dykhne said in a statement, adding management had made every effort to cut costs.

As of Jan. 1, the company had 2,560 employees. The airline had already been struggling with the financial and human impact after one its planes crashed shortly after takeoff en route from Tehran to Kiev on Jan. 8. All 176 people aboard the flight were killed.