UK wants to be first with carbon zero Atlantic plane 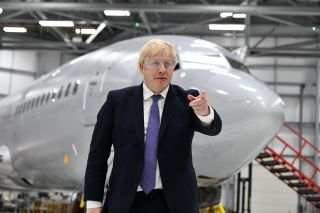 LONDON - The United Kingdom wants to be the first to develop a commercial jet plane to fly across the Atlantic Ocean without any carbon emissions. Prime Minister Boris Johnson surprised some in the aviation sector on Tuesday when he promised the United Kingdom would produce the world’s first zero emission long haul passenger plane.

"We've set up the JetZero council specifically to take forward the objective of being the first country to develop a jet commercial airliner to fly zero carbon across the Atlantic," Transport Secretary Gregg Shapps told the British parliament.

"That will involve not just investment in sustainable aviation fuels, of which money has already been invested... but also work on electric planes, hybrid planes and hydrogen planes as well," he said. "You can expect to be hearing a lot more."

France and European planemaker Airbus have spelled out goals to make the next generation of passenger jets significantly cleaner. Britain builds wings for Airbus aircraft but few in the aerospace industry expect it to develop competing commercial aircraft independently of Airbus.

A global goal to achieve net zero carbon emissions by 2050 will not be met without a huge acceleration in clean energy innovation, the International Energy Agency (IEA) said on Thursday.

"As part of our mission to reach Net Zero CO2 emissions by 2050, we should set ourselves the goal now of producing the world’s first zero emission long haul passenger plane," Johnson said on Tuesday.
© Reuters, aero.uk | Image: Campaign | 06/07/2020 08:25