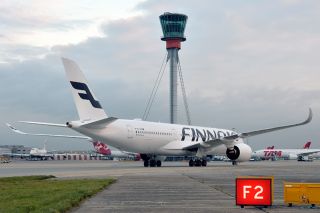 HELSINKI - Finnair plunged to a second-quarter loss as the coronavirus pandemic kept most flights grounded, and said it would make a similar loss this quarter, despite an increasing number of flights. Shares in Finland's flagship airline fell 4.5% to 0.50 euros in Friday trading.

"As ramp-up is an investment, and there are costs associated with it, and Finnair will be running with clearly reduced capacity, the comparable operating loss in Q3 will be of a similar magnitude than in Q2," the company said.

The second-quarter loss was in line with analysts' forecasts, but their consensus estimate for the third quarter currently stands at 30.4 million euros, according to Refinitiv Eikon data.

Finnair plans to operate 25% of its flights in July and around 50% in September.

"There are uncertainties relating to COVID-19 development and lifting of travel restrictions. As a result, the outlook remains unclear and the company does not provide revenue guidance for Q3," the airline said.

Airlines across the world have been scrambling to raise cash and slash costs after lockdowns to contain the virus brought global air travel almost to a halt.

Finnair raised 501 million euros earlier this month from an oversubscribed rights issue and has also received state and bank guarantees for a 600 million euro loan as it moves to bolster its finances.

"Thanks to the timely and comprehensive financing measures, our cash position remained strong at approximately 970 million euros after we received the last proceeds from the rights issue in early July," Chief Executive Topi Manner said in a statement.
© Reuters, aero.uk | Image: Finnair | 25/07/2020 10:55