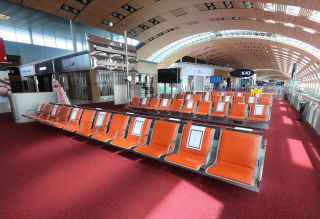 PARIS - The French government will reconsider plans to build a fourth terminal at Paris Charles de Gaulle airport because of the the coronavirus crisis, Transport Minister Jean-Baptiste Djebbari said.

State-owned airports operator ADP plans to build a fourth terminal at CGG-Roissy with capacity of 35 to 40 million passengers per year, but green activists and local towns are fighting it and the fall in traffic due to COVID-19 has raised doubts about its viability.

"The project to receive 40 million more passengers by 2030 is probably no longer justified as it was planned," Djebbari said on Europe 1 radio.

He said French airports would still need investment for upgrades and would have to make sure that new types of planes, such as hydrogen-powered planes, can land.

"The problem of T4 will be reviewed in depth, that is the reality," Djebbari said, adding that he has disscussed the issue several times with ADP chief Augustin de Romanet.

Djebbari said the virus crisis had cut traffic at French airports to about 40% of pre-crisis levels, with slightly more traffic on domestic lines and a bit less on long-distance lines.

"Traffic is restarting very gradually. We will see in September whether business clients return, that will give an indication for the end of the year and next year," he said.

Djebbari, a former airline pilot, added that depending on this outlook, projects for airports and will have to be adjusted and airlines will have to adapt their offer. ADP said on Monday passenger traffic could take as long as seven years to recover completely from the crisis.

First-half traffic at CDG and Orly combined fell by 62% to 19.8 million passengers. French media have estimated terminal 4 would cost 7 to 9 billion euros.