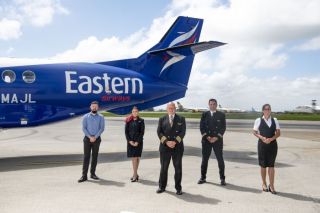 NEWQUAY - British Airways fills the Flybe gap on the route from London-Heathrow to Newquay in return for PSO subsidies - restoring a vital airlink between Cornwell and the capital through March 2021. Newquay airport also attracted a new regional airline that started to offer new services.

British Airways will began operating three flights a week to Newquay July 24th with plans to increase to five a week in August and daily from September. The route was vacant after regional airline Flybe ceased operations in March.

"The collapse of Flybe was a blow, but we have been able to work with Cornwall Airport Newquay, the Department for Transport and St Austell and Newquay MP Steve Double, to secure the new operator," said Cornwell Council transport administrator Geoff Brown.

"British Airways will be operating the PSO route under an emergency order for seven months while we work with the DfT to run the tender process for the four year contract which will begin in March 2021."

According to "Simple Flying", British Airways stands to receive 125,000 pounds per month in PSO subsidies to operate the route.

"Air connectivity between the North East and the South West is vital for business and leisure travel, given the distances and journey times required by any other means," said airport MD Pete Downes. "As Cornwall begins to reopen, this important new route has launched at the perfect time for us to welcome visitors from Teesside."
© aero.uk | Image: Newquay airport | 01/08/2020 10:34