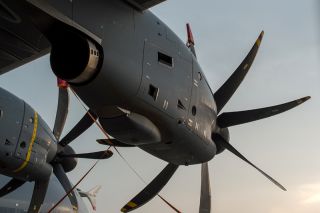 MADRID - Workers in the Spanish aerospace sector that includes various Airbus facilities will go on a one-day strike on Sept. 22 in a bid to protect their jobs amid the economic fallout from the COVID-19 pandemic, the UGT and CCOO unions said.

In a statement calling the industrial action, the unions demanded solutions so that the pandemic "does not serve as a mere excuse to make layoffs and dismantle workers' conditions."

European planemaker Airbus, 4% owned by the Spanish government, has announced plans to lay off about 900 workers in Spain as part of 15,000 job cuts worldwide, prompting protests outside its factories in July.

Then, Spain's government and Airbus said they had agreed measures aimed at propping up the aerospace sector and minimising job losses.

Spain has been hit especially hard by the coronavirus and on Monday became the first Western European country to pass 500,000 cases. Its economy shrank a record 18.5% in April-June, the sharpest drop among European Union member states.
© Reuters, aero.uk | 10/09/2020 07:40