Boeing in talks with FAA about 787 production issue 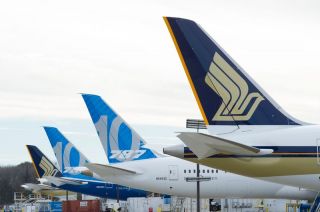 SEATTLE - Boeing said late on Thursday it was in discussions with U.S. safety regulators about a manufacturing issue found last year in its 787 Dreamliner. KOMO News Radio in Seattle reported the issue involved the vertical tail fin on the 787, citing federal records, and could affect 680 airplanes.

It was the fourth reported production issue disclosed in recent days involving the 787.

Asked about the latest issue, the Federal Aviation Administration reiterated on Thursday it "is investigating manufacturing flaws affecting certain Boeing 787 jetliners" but had made no decisions whether to issue new airworthiness directives.

KOMO said the issue involved excessive gaps that could pose a safety concern and cause strain on the structure of the plane over time.

Boeing said in a statement the newly reported "issue was found in late 2019" and had been addressed in production. It added its engineers determined "it did not immediately affect the safety of flight and no immediate action is required."

The largest U.S. airplane manufacturer added it was "working with the FAA to finalize guidance for the in-service fleet. Our expectation is that this will require a one-time inspection during regularly scheduled maintenance."

Boeing said on Tuesday it learned during fabrication of the 787 horizontal stabilizer that some components were clamped with greater force than specified, which could result in improper gap verification and shimming.

A person briefed on the matter said the horizontal stabilizer issue could require inspecting as many as about 900 airplanes. On Monday, the FAA said it was also investigating two other manufacturing flaws in some 787s.

Boeing said in August that airlines had removed eight 787s from service as a result of two distinct manufacturing issues in fuselage sections.

Boeing said on Monday that some airplanes had shims that were not the proper size, and some airplanes had areas that did not meet skin-flatness specifications. Shims are used to close tiny gaps in joints. Boeing identified the shimming issue in August 2019.

"Individually these issues, while not up to specifications, still meet limit load conditions. When combined in the same location however, they result in a condition that does not meet limit load requirements," Boeing said.
© Reuters, aero.uk | Image: Boeing | 11/09/2020 07:42