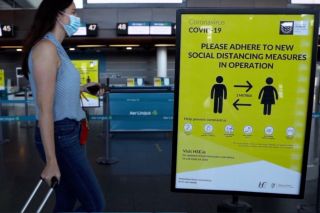 Aer Lingus said it was concerned by the fact the government had repeatedly indicated in recent weeks it planned to adopt a more liberal European Commission proposal, but instead cut back the number of countries exempt from quarantine.

Ireland had initially waived quarantine for travellers from countries with lower COVID-19 rates, but as its 14-day infection rate surged to above 50 cases per 100,000, the government said only places half that rate would be exempt.

The move came as the head of Ireland's COVID-19 modelling group on Wednesday warned of "exponential growth" without new restrictions.

The Commission envisages the removal of travel restrictions on countries with 14-day infection rates of under 50 per 100,000. Irish Prime Minister has promised to implement the EU rules once they are officially approved on Oct. 13.

"The 'green list' announced today does not represent a step towards alignment with the European Commission’s free movement proposal," Aer Lingus said in a statement.

Ryanair, which is taking a case to the Irish High Court challenging the legality of the quarantine rules, said the aviation and tourism sectors "cannot afford any further delays or indecision."

The airline has threatened to close bases in the country's second and third largest airports, Shannon and Cork, for the winter unless restrictions are eased.