Airline industry will never be the same again 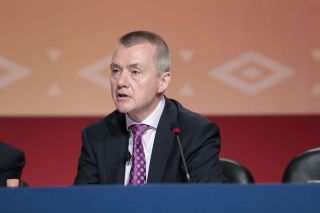 Looking five years ahead, Walsh forecast it would be a smaller industry and there would be fewer players. Most of the consolidation would initially come through failures, he said, as he also predicted Covid-19 would make airlines more resilient.

"Most airlines are restructuring in a very positive way: they're going to be more efficient and the cost base will be more variable, they'll be able to respond to crises going forward," he said.

Looking at the next few months though, he said it would be "very, very tough". Flight data shows that a hoped-for recovery in air travel in Europe has gone into reverse.

Eurocontrol, Europe's organisation for the safety of air navigation, said that European airlines such as British Airways and Ryanair had shown traffic declines of 4% over the last two weeks.

But striking a positive note, Walsh said that airlines should take comfort from the fact that there was still demand for travel.

After 41 years in the airline industry, former pilot Walsh 58, was CEO of IAG from 2011 when it was founded. He handed the reins to Spanish insider Luis Gallego on Sept. 8. "I've surprised myself at how easy it has been to adapt to retirement," Walsh said when asked about the last few weeks.
© Reuters, aero.uk | Image: British Airways | 23/09/2020 07:42