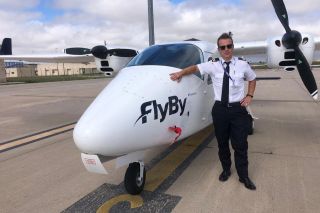 SORIA - FlyBy, a pilot training provider based in Spain, accepts 30 new cadets previously released from a British flight school in Portugal. Amid a difficult job market for pilots, FlyBy invests in second flight training base in northern Spain - and remains upbeat for an eventual industry rebound.

FlyBy has opened its second pilot training base in Northern Spain to help cater for "a significant upsurge in new cadets" - including thirty new students who have joined having been released by a British flight school in Portugal midway through their course.

The two-runway flight training base acquired by FlyBy is located in Soria, approximately one hour from the school`s main headquarters at Burgos Airport, and initially will exclusively accommodate the thirty new students.

"The students had completed ground school at the British flight school in Portugal but were released in May this year," FlyBy said.

Five years ago, FlyBy was facing bankruptcy with just ten cadets and nine staff - the school was taken over and restructured. Today, FlyBy accommodates 220 cadets and 55 staff from 55 countries around the world. "A further batch of 26 students are set to join the school in November," FlyBy said.

Despite a "considerabel impact of Covid-19 on the pilot flight training sector", FlyBe reports a year-to-date sales growth of 35 percent and bets on a market recovery.

"At FlyBy we look at the future with optimism", FlyBy CEO Alex Alvarez said. "We have no doubt that the aviation industry will bounce back, and we want to be fully prepared for it."

This year FlyBy has purchased six new trainer aircraft - four PS28 Cruisers, a P2006T and a Super Decathlon - and an Entrol Airbus A320 simulator with PBN and MCC certification, taking the total fleet to nineteen aircraft and two simulators.
© aero.uk | Image: FlyBy | 10/10/2020 12:30