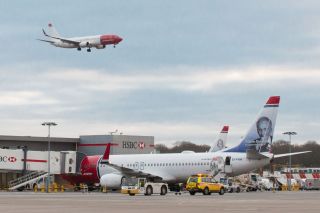 LONDON - Norwegian Air is considering laying off staff at its base at Gatwick Airport, a spokesman said, as the struggling budget airline steps up its cost-cutting drive to survive the industry’s worst crisis. The move could affect 259 cabin crew and pilots, just under a quarter of the 1,142 staff.

"These unprecedented circumstances that we now find ourselves in require us to review the London Gatwick crew base in line with current business needs and the associated costs going forward,” the company said in a statement.

"We have entered into consultation with our crew colleagues and unions based in the in UK and will look to find common solutions and mitigate redundancies.”

Gatwick Airport, which is owned by VINCI Airports and Global Infrastructure Partners, did not respond to requests for comment.

Rising levels of coronavirus infections across Europe and Britain’s quarantine rules for major holiday destinations such as Spain and France have quashed hopes of a swift aviation recovery. Transatlantic flights are on hold.

The British government’s furlough scheme, which has subsidised two-thirds of workers’ wages since April, also expires at the end of October.

Norwegian Air’s short-haul flights from Gatwick will not be affected as they are operated by pilots and crew based in the Nordics, the spokesman said.

Like most airlines, Norwegian’s business has collapsed. It was hit particularly hard because of large debts built up in recent years under a vast expansion plan.

Norwegian furloughed or laid off about 7,300 staff, roughly 90% of its employees, after the COVID-19 outbreak, but brought some back when limited flights resumed in the summer.

Creditors and lessors took control of Norwegian in May with a financial rescue that allowed it to access state-guaranteed loans of 3 billion Norwegian crowns (253.3 million pounds), with the aim of keeping it afloat until demand for air travel resumes.
© Reuters, aero.uk | Image: Norwegian | 13/10/2020 07:47