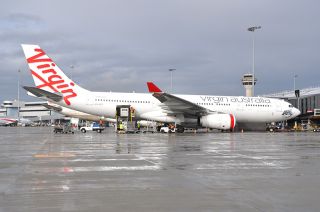 The management change at Virgin, to be effective soon after its sale to Bain Capital is completed next month, will set the stage for a battle with unions, who support Scurrah's vision for the full-service carrier and are concerned it will be taken downmarket under the U.S. private equity group's ownership.

Scurrah had clashed with Bain over wanting to maintain a more premium offering than desired by the U.S. firm, two people with knowledge of the matter said on condition of anonymity.

Administrator Vaughan Strawbridge of Deloitte said he had reaffirmed with Bain that Australia's No.2 airline would not be repositioned as a low-cost carrier once Hrdlicka took over.

"Virgin Australia will be a 'hybrid' airline, offering great value to customers by delivering a distinctive Virgin experience at competitive prices," Strawbridge said in a statement. "This will appeal to the full spectrum of travellers, from premium corporate through to more budget-focused customers."

Bain Managing Director Mike Murphy said his firm was committed to the strategy announced in August, when it outlined plans to protect thousands of jobs, invest in technology and honour all employee entitlements.

Virgin said then it aimed to be the "best value" carrier in the market rather than a low-cost carrier and it would maintain a business class offering and network of airport lounges.

Creditors owed nearly A$7 billion ($5 billion) last month approved Bain's purchase of the airline, which entered voluntary administration in April after suffering from a sharp plunge in demand because of the coronavirus pandemic.

Employees, the largest creditors by number, voted overwhelmingly in favour of the Bain purchase. Australian Services Union Assistant National Secretary Emeline Gaske said she was deeply concerned Bain was reneging on a commitment to keep Virgin a full-service airline.

Scurrah, who took over from long-serving boss John Borghetti in March 2019, was highly regarded by staff despite announcing plans to cut one-third of the workforce due to the pandemic.

Hrdlicka had a tense relationship with unions in her previous roles at Jetstar and Qantas Airways. "We will do our best to work with Jayne Hrdlicka but are mindful of her reputation and track record," said John Lyons, the president of The Association for Virgin Australia Group Pilots.

Before the pandemic, Virgin had spent a decade transforming itself from a low-cost carrier to a full-service rival to Qantas. But that came at the cost of years of losses.

Hrdlicka will look to lower the cost base even more than Scurrah had planned and to capitalise on knowledge gained from years of working at Virgin's biggest rival, said Brendan Sobie, an independent aviation analyst.

"She will know exactly where Virgin Australia needs to be positioned to finally be profitable assuming decent market conditions," Sobie said of Hrdlicka.
© Reuters, aero.uk | 15/10/2020 07:53