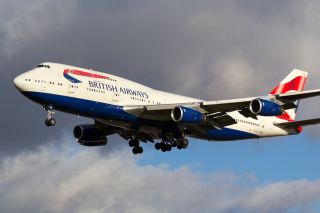 LONDON - A British Airways jumbo jet has found a new role as a film set, saving it from the scrap heap where dozens of other retired jumbos have ended up. BA said that "Whisky Victor" will fly to Dunsfold Aerodrome in Surrey, southern England, later on Thursday, where the airport will preserve it as a commercial TV and film set.

Blaming the coronavirus pandemic, BA said in July it would have to retire its entire jumbo jet fleet, a source of huge regret for aero-geeks and fans of the "Queen of the Skies", the aircraft which brought long-haul flights to the masses.

The pandemic has brought financial ruin to the travel industry. BA's owner IAG reported a 1.3 billion euro loss earlier on Thursday and warned on future demand.

At Dunsfold, the 747 will form the backdrop for interior and exterior shots and be used for training purposes, a BA statement said, adding that in future it would be opened up as an exhibition for visitors.

BA's last jumbos took off from Heathrow earlier in October, the end of an era for the world's most easily recognised jetliner with its humped fuselage, four engines and 16 main wheels.
© Reuters, aero.uk | Image: British Airways | 23/10/2020 07:28