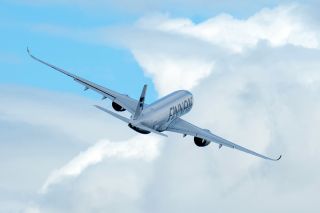 HELSINKI - Finnair reported a second consecutive quarterly loss on Wednesday and said the final quarter is likely to yield a similar result because of restrictions on movement imposed to curb the COVID-19 pandemic.

"Travel restrictions, which are particularly strict in Finland, led us to deviate from our plans and we continued to operate a restricted network throughout the quarter," Chief Executive Topi Manner said in a statement.

Finnair, which is 55.9% state owned, made an underlying operating loss of 167 million euros ($197 million) for July-September. That compared with a 174.3 million euro loss in the previous quarter and profit of 100.7 million euros a year earlier.

The airline said it would increase its cost-cutting target by 40 million euros to 140 million euros and reduce headcount by almost 1,100 from levels at the start of the year.

For more savings and to ensure competitiveness after the pandemic, Finnair said it was in talks to remove some index increments from its staff pensions and that the change was pending approval from authorities.

The airline said the planned pension expense reduction, which it has not yet included in its renewed cost cut target, would have a one-off positive impact of at least 85 million euros on fourth-quarter earnings, without an immediate impact on cash flow.

Finnair said the talks were ongoing and therefore the positive impact on earnings could be significantly higher than 85 million euros.