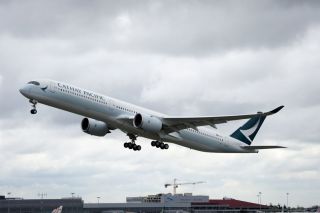 HONG KONG - Cathay Pacific said that a majority of pilots and flight attendants had signed new contracts that will result in permanent pay cuts. Cathay last week announced plans to cut 5,900 jobs to help it weather the pandemic, including nearly all positions at its regional airline Cathay Dragon, which it has shut down.

It is also seeking changes to contracts with pilots and cabin crew as part of a restructuring that would cost HK$2.2 billion ($284 million).

"We are very grateful that a majority of our pilots and cabin crew have already signed up to the new conditions of service," the airline said in a statement.

"We would like each and every one of our pilots and cabin crew to join us and be part of Cathay Pacific's future."

The employees have until Nov. 4 to sign new contracts but they will receive one year of transitional benefits like housing allowances for pilots rather than the two years offered for those that signed up by Wednesday evening.

The airline has told them if they do not agree to the new contracts by next week, they face termination, according to unions representing pilots and flight attendants.

The pilot contracts, which are broadly in line with those given to new hires since 2018, will result in permanent salary reductions of up to 58%, the Hong Kong Aircrew Officers Association (HKAOA) said on Tuesday.

Staff at many airlines around the world including rival Singapore Airlines Ltd have agreed to temporary pay cuts to help their companies get through the COVID-19 crisis, but the Cathay reduction is permanent.