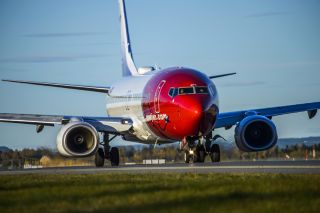 OSLO - Norwegian Air's debts of more than $5 billion and a "confusing" ownership structure are the main obstacles to any extra state aid, Norway's transport minister said after the government this week rejected a cash injection plea.

The pioneer in low-cost transatlantic flights, which grew rapidly through borrowing to build up a huge fleet of aircraft, was already facing financial difficulties before the coronavirus crisis brought air travel to a standstill.

Now the cash-strapped budget carrier, which is serving domestic routes only with just six of its 140 aircraft flying, has warned it could run out of funds in the first quarter of 2021 without state aid.

"We have not set a principle that we can't consider support for a company," Transport Minister Knut Arild Hareide told a conference organised by the Norwegian Confederation of Trade Unions (LO) on Thursday.

"But for us it's difficult when we know the company has reported net interest bearing debts of 48.5 billion crowns ($5.34 billion)," Hareide said of Norwegian.

The dramatic impact on airlines of the COVID-19 pandemic was highlighted on Thursday when state-owned Emirates said that Dubai would help it through the crisis after losses of $3.4 billion tipped its holding company into its first half-year loss in more than thirty years.

Norwegian's creditors and lessors took control of the airline in May with a partial debt conversion that allowed it to access state-guaranteed loans of 3 billion crowns, but the new owners have not injected much cash of their own.

"The ownership structure is quite confusing, there are no shareholders seeking to take the initiative," Hareide said.

Including leasing commitments, Norwegian's overall debt and liabilities stood at 66.8 billion Norwegian crowns ($7.34 billion) at the end of September, while its cash holdings amounted to 3.4 billion.

"It would not be right for the government to assume all the risk ... if we contribute billions of crowns there is a risk that some of the money could end up at U.S. banks and Chinese leasing companies," Hareide said.

While Norwegian's brand could potentially live on, its shares are unlikely to hold much value, HSBC said in a research note, lowering its target price to 0.1 crown from 0.25 crown.