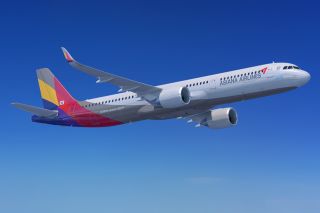 SEOUL - Shares in Asiana Airlines soared on Friday on prospects that the owner of larger rival Korean Air Lines could buy a hefty stake in the debt-laden, pandemic-hit carrier.

Hanjin Kal said on Friday that it is considering buying a stake in Asiana, while Asiana's state-run creditor said the deal was one of the options it was considering.

Hanjin Kal is expected to hold a board meeting on Monday and submit a letter of intent to Asiana early next week, Yonhap News Agency said. A deal would provide a lifeline for Asiana, which employs some 9,000 people and was restructuring heavily even before debt ballooned due to the coronavirus pandemic.

In return, Korean Air, the country's biggest airline, would see competition from South Korea's only other full service carrier fade. It also would gain a valuable ally in Asiana's creditor Korea Development Bank (KDB), as it seeks to fend off an activist shareholder from gaining control of its holding company Hanjin Kal.

According to media reports, Hanjin Kal is likely to issue new shares under the deal to purchase 30.8% of Asiana held by construction company Kumho Industrial Co Ltd. KDB would then buy the new shares and become a major shareholder in Hanjin Kal.

"From Hanjin Kal's standpoint, it could find no better ally than KDB," said Um Kyung-a, an analyst at Shinyoung Securities. "And if the two airlines merge, the country's aviation industry also benefits from the consolidation as too often there has been more supply than demand," she said.

Asiana and Kumho Industrial declined to comment. Kumho said in September that its plan to sell control of Asiana to Hyundai Development Co for about 2.5 trillion won ($2.1 billion) had fallen apart.

Shares in Asiana jumped nearly 8% on Friday, valuing it at around $860 million. The carrier is saddled with some $11.5 billion in debt and saw talks with another group collapse in September due to the pandemic.

Shares in Korean Air, however, fell almost 3% while those for Hanjin Kal tumbled more than 8%. Hanjin Kal and Korean Air have been locked in a bitter tussle since early last year with activist shareholder Korea Corporate Governance Improvement Fund (KCGI), whose camp has amassed 45.24% of the voting rights in Hanjin Kal.

KCGI argues it can improve the running of the company by installing professional managers, rather than have members of the founding family run the airline. Korean Air Chief Executive Walter Cho and his allies, which are believed to include Delta Air Lines, own 37.35%.

"We suspect that what KDB is doing - the provision of financial support to Hanjin Kal to acquire Asiana Airlines - is all about helping management keep their positions intact while ignoring the rights of other shareholders," KCGI said in a statement.

A combination of the two carriers, which together control more than 60% of the international passenger routes out of South Korea, could face close scrutiny from antitrust regulators as well as a public tired of South Korea's family-owned groups having too much sway.