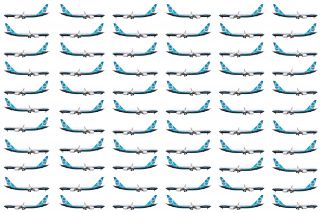 WASHINGTON - After a standoff with global regulators, management turmoil and a massive safety review, Boeing is set to win U.S. approval on Wednesday to resume flights of its 737 MAX. But the airplane maker faces headwinds from the coronavirus and new European tariffs as it scrambles to return the jet to service.

Reuters first reported on Nov. 9 that the FAA was in the final stages of reviewing proposed MAX changes and was set to lift its grounding order as early as Wednesday.

The FAA decision comes as other global regulators also move closer to decisions on allowing the plane to resume flights.

A group of relatives of MAX crash victims and some U.S. House Democrats have urged the FAA to disclose key supporting data in its examination of the plane.

The FAA is requiring new training to deal with a key safety system called MCAS tied to the two fatal crashes that killed 346 people and led to the plane's grounding in March 2019. It is also requiring new safeguards to MCAS and other software changes.

Last month, FAA Deputy Administrator Dan Elwell, who made the U.S. decision to ground the plane, told Reuters he had "absolutely no doubt in my mind that it will be as safe as, or safer than, any airplane in service today."

In December, Boeing's board forced out prior chief executive, Dennis Muilenburg, after he received a rebuke from FAA Administrator Steve Dickson. At the time, the FAA said Boeing was pursuing an unrealistic schedule for the return to service.

"I am very proud of this airplane"

On Oct. 28, Boeing Chief Executive Dave Calhoun told CNBC the MAX review was nearing the finish line. "I am very proud of that airplane," Calhoun said. "It is a remarkable machine and as safe as anything in the air."

Last week, in a long-running transatlantic subsidy spat, the European Union imposed tariffs on up to $4 billion of annual U.S. imports, including Boeing jets.

Leasing companies warned the tariffs would hamper the reintegration of the MAX in Europe, a key market. Ireland’s Ryanair said it would expect Boeing to absorb the cost of the tariffs, which mirror U.S. duties on imports of Airbus jets and other European goods.

Before returning it to the skies, airlines must complete software updates and fresh pilot training, a process that will take at least 30 days

Industry sources familiar with the branding say the "MAX" name will likely be phased out over time in favor of the formal names assigned to each variant, like "737-7" or "737-8."

Anticipating FAA approval, American Airlines plans to relaunch commercial MAX flights on Dec. 29 from Miami to New York City. Southwest Airlines, the world's largest MAX operator, does not plan to schedule flights on the aircraft until the second quarter of 2021.

The FAA said it would not delegate its authority to issue airworthiness certificates and export certificates for the 450 737 MAX airplanes built since the grounding, and plans in-person, individual inspections. Those could take a year or more to complete.
© Reuters, aero.uk | Image: Boeing, aero.uk (boa, composing) | 16/11/2020 13:04