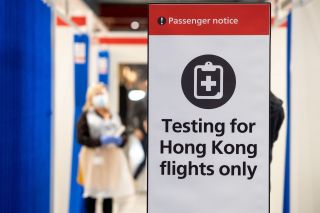 BRUSSELS - Many EU governments oppose common rules on the use of rapid COVID-19 tests, an internal document seen by Reuters says, in a new blow to airlines which are betting on fast-track testing to help bring the travel industry back to life.

Airlines are pressing governments for alternatives to blanket curbs on movement amid a second wave of COVID-19 sweeping Europe, with Lufthansa and Alitalia spearheading the use of rapid antigen tests.

But many EU governments are not ready for common procedures on the tests which would help ease travel across Europe, according to the document prepared by the German government, which currently holds the EU's rotating presidency.

"A large number of member states made clear that discussions on common minimum standards and criteria were premature," the paper, dated Nov. 12, says. The document will be on the table when EU leaders discuss coordination in fighting the pandemic in a video conference on Thursday.

Rapid antigen kits are less accurate than standard PCR (polymerase chain reaction) tests, but can offer results in a few minutes, as opposed to days.

European airlines are using them on passengers before departure, allowing only those who test negative to travel. But the testing is largely limited to domestic flights, partly because of European countries' reluctance to apply consistent rules.

Some governments seek more scientific evidence behind rapid testing, the German document says. Many say testing is a national issue for which there is no need for a common approach, the document says without naming any state. The executive EU Commission will issue a recommendation on how to use rapid testing on Wednesday, but governments are not obliged to heed it.

The commission had also planned to issue advice on Wednesday on quarantine and self-isolation for those who come into contact with people who test positive for COVID-19 - but it has now decided to delay the non-binding proposal because of contrasting scientific advice, an EU official said.

A commission spokesman was not immediately available for comment.

"It is a disaster"

That comes as a further blow for the industry, as common quarantine rules would eliminate another major hurdle to travellers, who now have to abide by different requirements when they cross a national EU border.

"The approaches of member states on quarantine obligations in connection with travel differ considerably," the German document says.

At a video conference in late October, EU leaders pledged to do more together for testing and tracing, and avoid divisions that dogged the 27-nation bloc at the beginning of the pandemic in the spring, when many countries closed their borders contributing to medicine shortages and food blockages.

But immediately after the virtual summit, national experts in technical meetings kept dragging their feet. "It is a disaster," a second EU official said, adding that diplomats and experts showed little appetite for more cooperation.

The German document was initially labelled a "progress report", but it has been renamed "report on the state of play of EU coordination" against the pandemic, because there had been "little progress", a European diplomat said.

"The report provides a snapshot of the state of play on a number of COVID-19 related topics. Given that the issues addressed are all matters of national competency, we will continue to work intensively with our EU partners and the commission to take EU coordination forward," a spokesman for the German presidency said.

On tracing, which is essential to monitor the spread of the disease, the EU Commission has set up a platform that would allow national apps to work across EU borders, so that people can continue to be traced when they are abroad.

But at present only six national apps have joined the common platform, the document says, adding however that other 19 were lined up to be added by the end of this month.

A common digital form to locate passengers is still a work in progress. Currently states use these forms for different purposes, some of them only on paper. The document says that the goal is to have a system in place for all types of transport by April.
© Reuters, aero.uk | Image: Nuremberg Airport | 17/11/2020 12:34