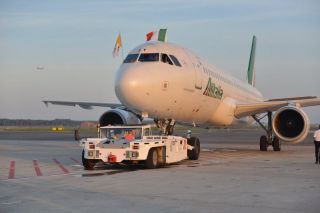 MILAN - Italy would have to drop the 75-year-old Alitalia brand if it wants the European Commission to approve plans to relaunch the airline, according to a letter published by L'Espresso magazine. Loss-making Alitalia has endured 11 years of turbulent private management and three failed restructuring attempts.

The government is now seeking to nationalise and relaunch the ailing flag carrier after the coronavirus crisis scuppered plans to sell it.

"The Alitalia brand should not be retained by the NewCo, since it is an emblematic indicator of continuity," the European Union said in the letter published by L'Espresso.

The letter, dated Jan. 8, also asks Rome to launch an "open, transparent, non-discriminatory and unconditional tender" to shed Alitalia assets, rejecting the idea that the old carrier could sell its belongings to the new company in a private negotiation.

A Commission representative said the EU executive had no comment on the press report and that it is in contact with the Italian authorities on the matter and cannot comment on ongoing discussions.

The EU can block the injection of 3 billion euros ($3.63 billion) earmarked by the Italian government for the new company, thwarting Rome's ambitions for the airline.

"The NewCo should not retain the combined aviation, ground handling and maintenance businesses," the EU competition watchdog is quoted as saying in the letter.

Brussels suggests that the ground-handling and maintenance businesses should be sold separately to a third party. A spin-off of the old Alitalia, which employs more than 11,000 workers in total, is a political hot potato for the government because it would mean potential job cuts for employees outside the aviation business.

A representative of the Italian industry ministry, which is responsible for the nationalisation of Alitalia, was not immediately available for a comment.

Lufthansa announced the alternate route for the flight via the Falklands in a press release on Wednesday touting "the longest passenger flight in the history of its company, marking one of the most unique flights the airline has ever carried out."

Both passengers and crew at present are in a 14-day quarantine and their luggage sealed and decontaminated in a bid to try to keep COVID cases low in the remote region.
© Reuters, aero.uk | Image: Alitalia | 23/01/2021 08:02