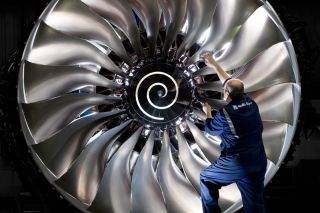 LONDON - Rolls-Royce lowered forecasts for how much its engines will fly this year as tighter coronavirus travel restrictions inflict fresh pain on airlines, saying this would mean a cash outflow of some 2 billion pounds ($2.7 billion). Countries around the world have tightened border controls.

New COVID-19 variants are feared to be more transmissible, and that vaccines may not work against one from South African.

That has caused a further air traffic drop just as airlines and engine makers were hoping for a recovery, forcing Rolls to issue a trading update just six weeks after its last warning.

Flying hours, Rolls' main revenue stream from airlines as they pay depending on how much they use its engines, are expected to be about 55% of 2019 levels, compared to a base forecast of 70% it gave in October.

"Enhanced restrictions are delaying the recovery of long-haul travel over the coming months compared to our prior expectations," Rolls, whose engines power aircraft like Boeing 787s and Airbus A350s, said in a statement on Tuesday.

The downgrade came after Rolls said in December that 2020's cash outflow would be worse than expected at 4.2 billion pounds and its shares fell 5% to 93 pence at 1125 GMT.

Negative travel news has erased some of the gains made since November when a vaccine was discovered, with Rolls down 18% in the last month. "Challenging conditions in the broader industry mean there may be incremental disappointments in a number of other areas," Morgan Stanley analysts said in a note.

Rolls said that liquidity of 9 billion pounds gave it confidence it was well-positioned for the future. Last year, it raised 5 billion pounds from shareholders and in loans to buffer against the uncertain pace of recovery, after some analysts speculated it could be nationalised.

Rolls stuck to its forecast to turn cash flow positive at some point during the second half of 2021, saying it expected the cash outflow mainly in the first half, and said it remained on track to meet its 2022 cash flow guidance contingent on the expected recovery in flying hours.
© Reuters, aero.uk | Image: Rolls-Royce | 26/01/2021 13:30