British Airways to phase out its last A318 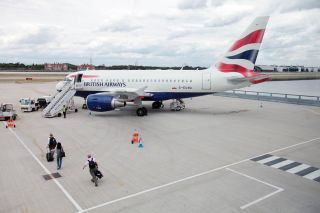 LONDON - British Airways will not return its iconic A318 "banker shuttle" from London-City to New York - the airplane was ferried to a scrapyard Wednesday.

BA001 ranks easily among the most special British Airways flights. The all business service from London City to JFK not only stopped in Shannon to refuel but also for passengers to pre-clear U.S. immigration.

Once operated by two A318s, British Airways cut the service to one aircraft by 2017 and discontinued the flight as demand ran dry during the pandemic in early 2020. The aircraft - G-EUNA - spent the remainder of the year stored in Madrid. The plane will not be returned to service.