TWA flight 800 reconstruction to be decommissioned 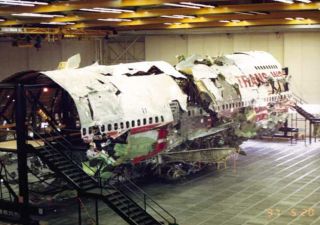 NTSBs TWA Flight 800 Reconstruction to be Decommissioned, © NTSB
WASHINGTON - The National Transportation Safety Board announced Monday its decision to decommission the TWA Flight 800 reconstruction as the agency prepares for the expiration of the lease for its Ashburn, Virginia, Training Center.

The reconstruction, housed in the 30,000 square foot hangar along with other training tools at the NTSB’s Training Center, has been used in the NTSB’s accident investigation training courses for nearly 20 years.

After an exhaustive, four-year-long investigation, the NTSB determined the probable cause of the crash was an explosion in the center wing fuel tank. Evidence indicated the explosion was the result of an electrical failure that ignited the flammable fuel/air mixture in the tank.

"The investigation of the crash of TWA Flight 800 is a seminal moment in aviation safety history," said NTSB Managing Director Sharon Bryson. "From that investigation we issued safety recommendations that fundamentally changed the way aircraft are designed", said Bryson.

The NTSB plans to stop use of the reconstruction July 7, 2021. For several months thereafter, the NTSB will thoroughly document the reconstruction using various 3-D scanning techniques. The scanned data will be archived for historical purposes.

When the NTSB moved the reconstruction to the Training Center, it did so with the stipulation that it would be used solely as a training resource and never as an exhibit or public display. To honor this agreement made with the families of the victims of TWA Flight 800, the NTSB will work closely with a federal government contractor to dismantle the reconstruction and destroy the wreckage.

"Our Transportation Disaster Assistance division and I have connected with representatives of TWA Flight 800 family groups to help ensure families of those who perished on TWA Flight 800 learned of our decision directly from the NTSB before our public announcement,” said Bryson.

Between calendar year 2015 and 2019 the NTSB trained a combined annual average of 2,622 students including NTSB investigators and staff, and external stakeholders involved in transportation safety, advocacy, family assistance and emergency response. The NTSB is exploring options to continue its robust training program.
© aero.uk | Image: NTSB | 23/02/2021 13:27