Jet leasing in shake-up as AerCap, GE near deal 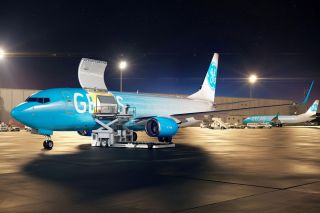 PARIS - Aircraft leasing is poised for its biggest shake-up in almost a decade as its top two players, AerCap Holdings and GE unit GECAS, discuss a deal to forge an industry titan with more than 2,000 jets and spur consolidation in the sector, people familiar with the matter said on Monday.

Talks over a tie-up follow years of speculation over a sale of GECAS and come as COVID-19 is expected to shift more of the world's jetliner fleet from the balance sheets of debt-laden airlines into the arms of the $60 billion leasing industry.

Aircraft lessors, who typically rent out aircraft for up to 12 years at a time, already account for about half of deliveries of jets built by Airbus SE and Boeing Co.

The two sides have been in discussions since late last year, one of the sources said. If the negotiations conclude successfully, an all-stock deal could come as early as this week, another of the sources added.

The Wall Street Journal, which first reported the possible deal, said the transaction could be worth $30 billion.

AerCap is the world's largest owner of commercial aircraft, with 1,080 jets directly on its books or managed on behalf of others. GECAS has 984 aircraft owned or under management, according to UK-based consultancy IBA Group.

The proposed tie-up would mark AerCap's most ambitious expansion under tenacious Chief Executive Aengus Kelly, who in 2013 struck a deal to buy its largest rival, Los Angeles-based International Lease Finance Corp, after the financial crisis.

It would also involve the latest move by GE Chief Executive Larry Culp to offload businesses and reduce debt since he took the reins of the struggling conglomerate in 2018. GE has already taken steps to reduce its exposure to aircraft financing.

Vertical Research Partners analyst Rob Stallard said the resulting behemoth would be the "mother of all leasing companies."

However, if a deal goes ahead, its sheer size could attract attention from antitrust regulators because AerCap and GECAS are already almost twice as big in fleet terms as the sector's third-largest player, Dublin-based Avolon, analysts said.

"One option for AerCap will be to dispose of several hundred airplanes over time to comply with possible antitrust requirements," he added.

A mega-merger in leasing could also spur further consolidation in a sector that has featured multiple takeovers in recent years. "They will all be thinking there’s probably going to be more consolidation," IBA Group President Phil Seymour said of smaller lessors, adding that this was the "natural impact of a down cycle."

Major leasing companies are eyeing growth as airlines focus on repairing balance sheets wrecked by the drop in air travel during the COVID-19 pandemic, even though vaccines have prompted some talk of recovery.

Singapore bank DBS Group said it expected aircraft lessors would largely emerge stronger from the crisis, but it warned that the weak finances of airlines meant some lessors would face extra problems collecting money from carriers or be forced to accept payment delays.