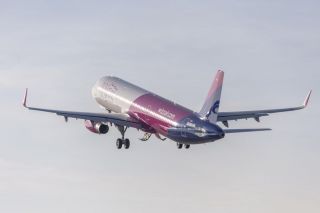 LONDON - The largest Wizz Air investor Indigo Partners sold about half its stake in the Hungary-based low cost airline to institutional investors, a statement on Tuesday said, raising gross proceeds of around 400 million pounds ($553 million).

Private equity firm Indigo Partners did own 15 million shares or a 17.5% stake in Wizz Air prior to the disposal, which was first announced on Monday. The sale of 7.7 million shares will leave it with a stake of about 8.5%.

The sale was carried out via an accelerated bookbuild process at a price of 5,200 pence per placing share. The shares had closed at 5,505 pence on Monday. The completion of the placing is expected on March 18.

Wizz Air, like most European airlines, is hoping that travel will properly restart in May after a year of lockdowns and restrictions, but rising case numbers in some parts of Europe now threaten to derail that recovery.

In February, Wizz passenger numbers were down 87% compared to the year earlier period, highlighting the scale of the travel slump.

But cash-rich Wizz has weathered the pandemic better than many airlines, continuing to receive new planes, and saying it has the financial resources to survive even if flying does not pick-up this year. Its shares have risen 13% over the last three months on hopes for a travel restart.
© Reuters, aero.uk | 17/03/2021 08:43